Jan 31, 2021 | Lisa Wells
Share on Facebook
It’s no secret the musical wonder known as Billie Eilish has a major collaborator up her sleeve. Finneas O’Connell is her right-hand man and he’s co-written every single song in her repertoire. Who’s he? Finneas is her big brother and she adores him. They have been writing music together since she was 12 years old. Finneas is carving out a name for himself in the industry. He’s composed songs for Justin Bieber, Demi Lovato, Selena Gomez, Halsey, and Camila Cabello. Along with producing all of his sister’s work, he has also recorded a solo album. 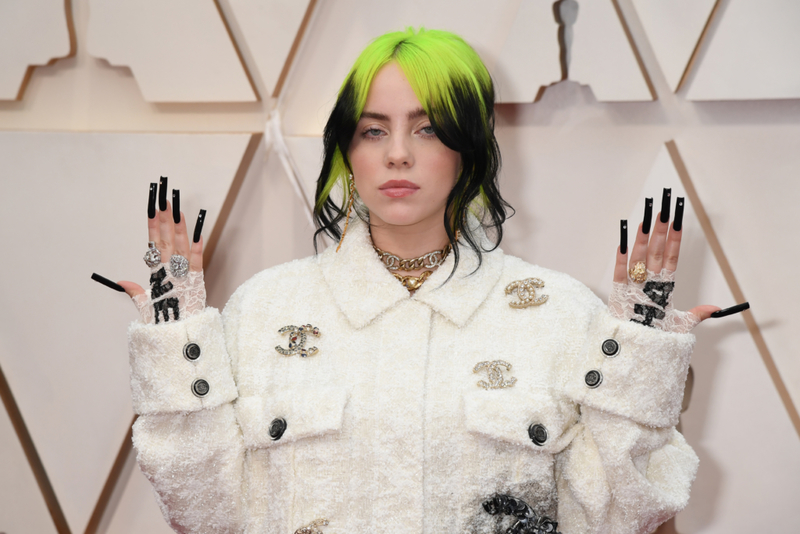 Getty Images Photo by Jeff Kravitz/FilmMagic
Though Eilish loves working with her brother, she doesn’t like working with others. She expressed a strong distaste for collaborations when “Spin” asked her about the issue in 2019. Recoiling, the phenom said she doesn’t like mixing friendships and music. “I don’t like people watching me work.” No offense, but she’s just not interested. Meanwhile, Eilish has accrued a fan-following of top musical acts who would like nothing more than to work with her. BTS showed a strong interest, Tyler, the Creator basically begged her to make some noise together, Elton John thinks she deserves a duet, Dave Grohl, also, expressed interest, comparing her to the “it” Nirvana had, and, finally, Thom Yorke has given her the nod. No word if she will reach out to these admirers. However, Eilish has partnered with a handful of her favorite artists. These are her collaborations.

“&burn” is a song written by Eilish and McConnell. Eilish was thrilled when Vince Staples, her first choice, agreed to contribute the rap lyric to “&burn.” His voice accentuates the hip hop elements in her vocals, mixed and scratched. The pair performed it live at Coachella 2019. “&burn” was released for download or stream in December 2017 and on the EP “Don’t Smile at Me.”

Billie Eilish and Rosalia released “Lo Vas A Olividar” in January 2021. The haunting melody, translated, “You Will Forget It” is sung in Spanish, primarily, by the two young women. It ends with a dramatic hook by Eilish, “If I wasn’t important, then why would you waste all your poison.” The duo recorded the song for HBO’s Euphoria soundtrack.

Eilish got to work with her long-time celeb obsession when she recorded a remix of the massive hit “Bad Guy.” She met Justin Bieber at Coachella 2019. He was happy to team up with her. They recorded the remix that summer after teasing it on Instagram.

Billie Eilish said “Lovely” came about when she was hanging out with Khalid and her brother. The song just happened. They recorded “Lovely” and it was released in April 2018. Eilish and Khalid recorded it for the second season of the “13 Reasons Why” soundtrack. It’s also on her “EP Don’t Smile at Me.”

This Young DJ Rocked His School in the Best Way Possible
Cael Bell from Manchester used his lunch break to host and DJ an actual party at his school's bathroom.

Grandpa’s Graduation: This Man Never Gave up on His Dream
The usual course of life these days stops at the life stations of school, college, job, marriage, family. Usually in that order. But that's not how the life of Giuseppe..