Foods You Should Never Eat on a Plane

Let’s just admit it — there’s not about enjoyable air travel. Airplanes and airports are necessary evils when we’re trying to travel long distances, and we all just tend to grin and bear it. The restaurants inside of airports might be a light in the terminal’s darkness, but the food served on the planes is a whole different subject. Say the words “airplane food,” and you’ll likely hear a chorus of groans, with most people agreeing that it’s best to stay away from that particular in-flight offering. Of course, there are plenty of other choices besides those questionable compartmentalized trays — the airport offers a ton of grab-and-go meals and snacks that you can bring on board with you. Unfortunately, a lot of those are options you really shouldn’t eat on a plane, both for your health and for the sake of not thoroughly annoying your fellow passengers. 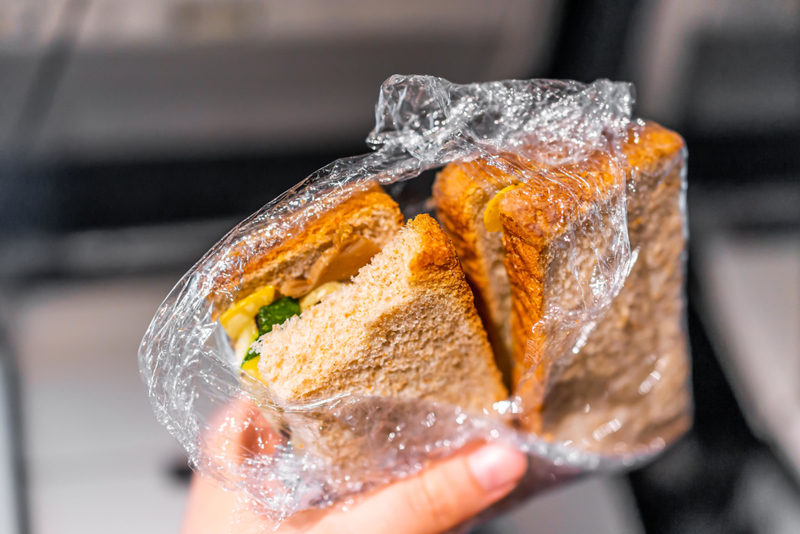 It turns out the holding tanks for water can be a breeding ground for bacteria and are typically not cleaned more than once a year. Even after making the cleaning and testing requirements more rigorous, 12 percent of commercial airplanes still tested positive for coliform. Next Time the beverage cart goes rolling by, grab the bottled water instead.

Take it from me — do not eat those foil-topped yogurts on a plane. The plastic containers blow up like balloons once you’re in the air, and I promise you they will explode when you open them. If you must have your creamy snack, be very careful when peeling back the foil (go slow!), and please point away from your neighbors. A yogurt eruption is a surefire way to make enemies on a long flight. 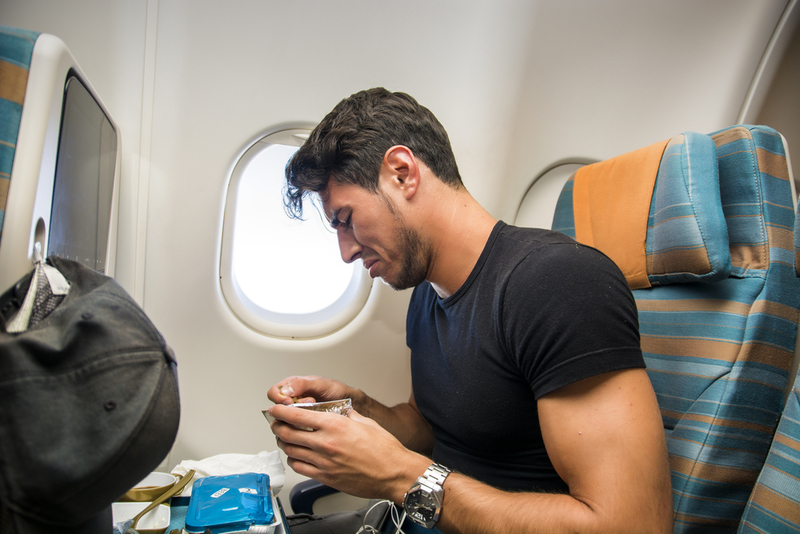 Gum might seem like the best choice for a plane: You’re not stinking up the cabin, and you’re not eating heavy, indigestible foods. While this might be true, chewing too much gum can really wreak havoc on your digestive system, causing gas, bloating, and diarrhea — three things you most definitely do not want to contend with while flying. Gum causes bloating from the artificial sweeteners — since they’re not absorbed in the small intestines, so they get fermented in the colon. And when you chew gum, you also swallow a lot of air, which can cause gas and bloat.

It’s no secret that alcohol has a dehydrating effect on the body, but partaking in those tiny bottles of booze while flying could make things doubly bad. Because of the low humidity in the aircraft’s cabin, we already tend to feel a bit dried out on a plane, so when you add a few Bloody Marys into the mix, your hydration level takes another nosedive. Just make sure you’re hitting the (bottled!) water hard if you have a cocktail or two.

If you suffer from swollen feet while flying, a diet high in sodium could be partially blamed. Because salt can cause the body to retain fluid, it’s best to avoid salty foods the day before and the day of travel. Sorry, but that means grabbing a hash brown and Egg McMuffin to eat on the plane is out.

Chips seem fairly innocuous, right? Wrong. When the person next to you is already on your nerves for hogging the armrest, the last thing you want to do is listen to them loudly crunching on chips. And for some reason, that crunch just seems 100 times amplified at 30,000 feet. Time for the noise-canceling headphones.